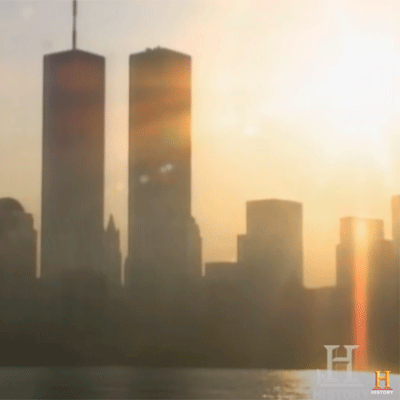 The shock has receded and the Ground Zeroes have been repaired, yet the damage that was done of September 11, 2001, is still remembered.  It should be.  Almost 3,000 innocent people lost their lives that day at the hands of a few Islamic terrorists who hated our nation and its people so much that they willingly committed suicide.

Hate will do that.  It has no redeeming feature whatsoever.  Hatred consumes the mind, body, and soul.  It is irrational and destructive.

On 9/11/2001, hate also consumed the lives of 2,996 innocent people, most of them perishing at the World Trade Center in New York City.   This is what Ground Zero in Manhattan looked like:

Of the 2,726 who died in the World Trade Center, according to Center for Disease Control records,

the median age was 39 years, with ages ranging from 2 years old to 81 years old;

This is what hate looked like on 9/11 as it unfolded (video from the History Channel):

9/11 brought a nation together in a way nothing had in a long while.  Recalling that day, Michael Toscano recently wrote, “Never in my life had I felt such sadness; nor had I experienced such unity. Everywhere you looked, total strangers were weeping together in a heap. Hearty chants of “U.S.A.! U.S.A.!” echoed in the night.”

Despite Mayor Bill DeBlasio’s effort to cancel this year’s 9/11 Tribute in Light, it will go on.  That’s good.  Hate should never be allowed to defeat us.