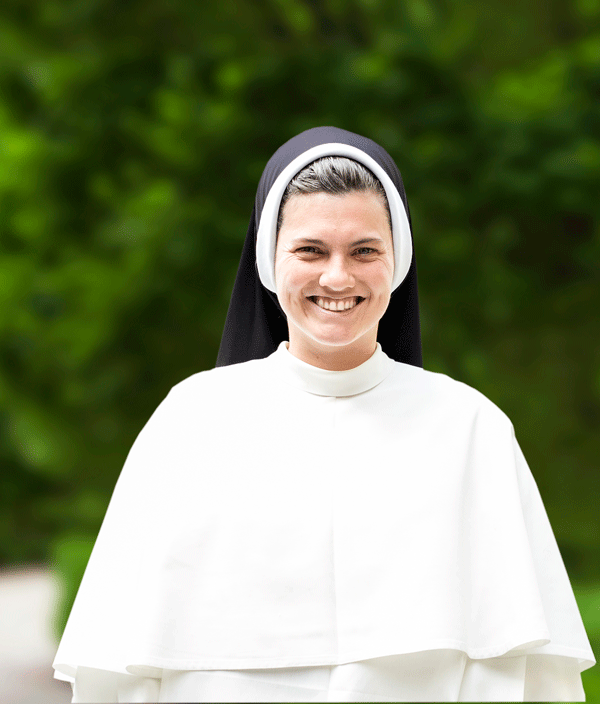 Robert Frost’s famous poem, The Road Not Taken, resonates with many readers, especially those who wonder which course in life to choose.

Sister Agnes Clare could surely say her life’s course began with some very unique early road signs.  She is one of few to have the privilege of personally knowing Mother Teresa of Calcutta, the canonised Roman Catholic sister who founded the Missionaries of Charity and whose charitable work on behalf of the poor and sick garnered the admiration and respect of millions around the globe.

When I was a baby, my family met Mother Teresa in New York during a mass for the Missionaries of Charity.  She played with me during the mass and afterwards held me.  My parents asked her to pray that I would become a Missionary of Charity.  She responded, “You pray!”  However, she later proceeded, in letters written to my parents, to invite them to pray that at least one of their children would become the spouse of Christ.

Clare Girard had different plans for her life at the time she interned with us in 2007.  Always upbeat and smiling – she was urged by a speaking coach to smile less if she wanted to be taken seriously! – Clare was taking 6 courses, working two jobs, and serving as Vice President of Franciscan University’s Students for Life group as a means of progressing towards toward her goal of becoming a lawyer and saving babies from abortion.  Besides, she wanted to have children of her own one day – a personal desire incompatible with vocation as a Catholic sister.

Clare graduated college and put her Humanities degree to work as a high school teacher.  After her summer plans fell through one year, she was drawn irresistibly by grace to travel to Kolkata (formerly Calcutta), India to work as a summer volunteer with the Missionaries of Charity.

I loved watching the Missionaries of Charity work with the poor and their joy reminded me of the Nashville Dominicans.  Upon returning home, in prayer I discovered that God was calling me to alleviate the spiritual poverty, caused by moral relativism, lies and loneliness in the United States, just as Mother Teresa had alleviated the physical poverty of the poorest of the poor in Kolkata.

Clare subsequently went on a Vocations Retreat with the Nashville Dominicans, an 800-year-old Roman Catholic Order founded by St. Dominic that focused on learning and charity.  During that weekend and in the years that followed, she discovered God’s wondrous plan for her.

The road she chose to take has made a world of difference.  “His will,” she says, “is the greatest adventure of all.”