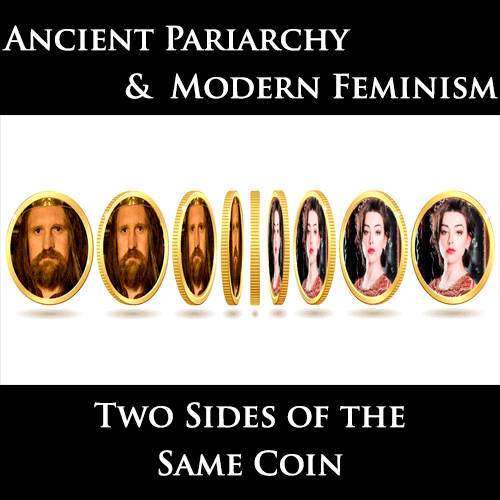 “How can you not be a feminist?” is a question many women are asked. The answer is a straightforward one for most:  We want legal and economic equality with men, but we want no part in the current feminist effort to replace the ancient patriarchal system with a retaliatory modern matriarchal system.

Throughout most of early human history, women were treated as little more than property of men. Women couldn’t leave the home unaccompanied, make decisions for themselves, or inherit or own property.  They were subservient to their fathers until handed off to their husbands.  (Under certain religious influences in some parts of the world today, that ancient patriarchal system is still in effect.)

Women in the Victorian era came up a peg or two.  While their lives remained largely controlled by familial males, the rationale changed from an attitude of ownership to one of safeguarding the weaker sex.

The female mind was deemed “too fragile” to be educated, or to understand the complexity of personal finance, business commerce, and public policy. Women who dared to “devote themselves too enthusiastically to intellectual pursuits” were derided as “blue stockings.

Blue-stockings were considered unfeminine and off-putting in the way that they attempted to usurp men’s ‘natural’ intellectual superiority. Some doctors reported that too much study actually had a damaging effect on the ovaries, turning attractive young women into dried-up prunes.

Later in the century, when Oxford and Cambridge opened their doors to women, many families refused to let their clever daughters attend for fear that they would make themselves unmarriageable.

The “rights” women enjoyed during this era were limited solely to the realm of husband, home, and family, as expressed by the 19th Century card below. Under the ancient patriarchal system, men decreed; women were obliged to acquiesce.

To many women, modern feminism is the flip side of the ancient patriarchal coin. Much of what feminism has demanded over the past half century is retaliatory, and its ultimate aim appears to be to make men subservient to women.

Feminists have long sought to label ordinary masculine characteristics, such as rough-and-tumble play, as violent and toxic. Feminist theorists in education tried for years to retrain little boys to behave and play like little girls.

The effort failed, as Christina Hoff Sommers, author of the 2001 book, The War Against Boys: How Misguided Feminism is Harming Our Young Men, explains in the short video clip below.

When feminists couldn’t get the upper hand through social engineering, they turned to other means.

Title IX, enforced by the U.S. Department of Education’s Office of Civil Rights, was enacted to eliminate discrimination against women in education programs and activities funded by the federal government. By anyone’s measure, Title IX has succeeded so well that today more women than men earn higher education degrees.

But feminists used Title IX under the Obama administration to go where no one ever intended, turning it into a feminist witch hunt against males for sexual harassment. Under Obama’s guidelines, sexual harassment was defined as any unwelcome conduct including unwanted verbal, nonverbal, or physical advances of a sexual nature.  In many colleges and universities, legal rights ordinarily afforded an accused and rules of evidence were tossed aside, and the word of a woman against a man was treated as sacrosanct.

This past November, Secretary of Education Betsy DeVos introduced long-overdue reforms to the federal Title IX policy. Yet colleges and universities will remain hostile territory for young men until those new policies are fully implemented.

Billed as social justice for women, the #MeToo movement didn’t seek justice as much as it sought revenge and punishment, often for offenses in the long distant past. Some of those offenses were real, serious, and well-documented; others were imagined, fallacious, and lacked any evidence.

Judge Brett Kavanaugh’s nomination to the Supreme Court was nearly derailed on the basis of a single woman’s vague and unsubstantiated allegation, despite countless other women’s testimony of a life lived in honor. Thankfully, Judge Kavanaugh fought back, and the general public eventually saw the allegation for what it was:  an empty, ruthless scheme to destroy a man.

Under the broad brush portrayed by feminists’ new matriarchy, men are universally evil and must be brought under the control of women.

Such is the subtle message of the new Gillette razor ad campaign, “We Believe: the Best Men Can Be.”  The ad begins by defining masculinity in the most negative terms possible:

Bullying, the MeToo movement against sexual harassment, toxic masculinity, is this the best a man can get? Is it?  We can’t hide from it.  It’s been going on far too long. …

Feminists’ matriarchal designs were carried one grand leap forward this August when new American Psychological Association (APA) Guidelines for the Psychological Practice with Boys and Men were released.

In its press release, the APA asserted that “traditional masculinity – marked by stoicism, competitiveness, dominance and aggression – is on the whole, harmful.”

Psychotherapist Erica Komisar warns in an article in the Wall Street Journal that the guidelines, which she describes as “defining ‘traditional masculinity’ as a pathological state,” will only make matters worse.

The APA claims that masculinity is to blame for the oppression and abuse of women. The report encourages clinicians to evaluate masculinity as an evil to be tamed, rather than a force to be integrated. “Although the majority of young men may not identify with explicit sexist beliefs,” it states, “for some men, sexism may become deeply engrained in their construction of masculinity.” The association urges therapists to help men “identify how they have been harmed by discrimination against those who are gender nonconforming”—an ideological claim transformed into a clinical treatment recommendation.

The truth is that masculine traits such as aggression, competitiveness and protective vigilance not only can be positive, but also have a biological basis. Boys and men produce far more testosterone, which is associated biologically and behaviorally with increased aggression and competitiveness. They also produce more vasopressin, a hormone originating in the brain that makes men aggressively protective of their loved ones.

Komisar acknowledges that the “cult of manhood can be harmful when taken to extremes,” as can the harsh judging of women “who choose to stay home with their children.”

Teaching boys—or girls, for that matter—that they should always be stoic, keep their feelings inside and never allow themselves to be vulnerable is a recipe for mental illness. But so is telling boys that aggression, competitiveness and protectiveness is a sign of sickness. The same is true of telling girls that their desire to nurture children is shameful.

The assertion by some psychologists today that normal masculinity is “toxic” is as absurd as the assertion by some physicians in the 19th century that “too much study actually had a damaging effect on [women’s] ovaries, turning attractive young women into dried up prunes.”

Most rational women want no association with either.