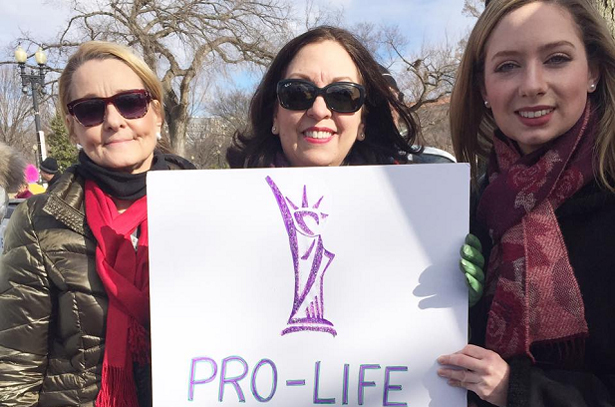 The Clare Boothe Luce Policy Institute was proud to advocate for life at today's March for Life, which kicked off with remarks from Senior Advisor to President Trump and CBLPI board member Kellyanne Conway.

Having been to a couple March for Life events in the past, I'm always somewhat overcome by emotion to see thousands of men and women, of all ages and races, peacefully gather at the Mall to be voices for those who are voiceless, and to stand up for life as our God-given right. This year was especially profound, because our new administration was represented, and strongly defended life. As the sun shone over the Washington Monument and the crowds sang our national anthem, life was celebrated and hope ignited. Since Roe V. Wade, over fifty-eight million souls have been aborted. And while radical feminists would have you believe that these abortions benefit womankind, the Clare Boothe Luce Policy Institute knows that every woman's life deserves to be protected, even if it is still inside the womb. In fact, abortion is especially dangerous to womankind due to certain cultures valuing boys more than girls. That is why we were proud to use our sign to remind the Left that "Pro-life = Pro-Woman."

Our namesake, Clare Boothe Luce, was also a defender of life. According to Nobility, a Margaret Sanger supporter once attacked Clare for her pro-life stance. Clare had herself been raised by a single, impoverished mother; no doubt the Sanger supporter would have advocated for Clare's mother to have an abortion. Clare replied to her attacker, "Now will you tell me why I did not have the right to be born?"

Kellyanne Conway, Senior Advisor to the President, addressed the gathering:

More scenes from the March: