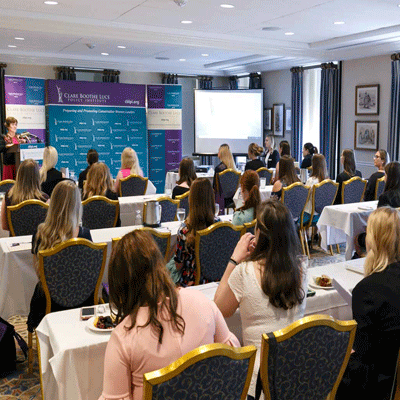 On June 8 and 9, CBLPI  hosted its annual DC Women’s Summit to bring together conservative interns working in the nation’s capital for the summer. Aptly located at the elegant National Republican Club of Capitol Hill, the Summit provided attendees with opportunities to hear from leading conservative women, network with interns from other organizations, and learn how to best communicate with media to deliver a polished message.

In typical CBLPI fashion, Founder and President Michelle Easton kicked off the weekend with a friendly and welcoming tone by offering opening remarks and inviting each attendee to introduce herself to the room.

CBLPI board member Marji Ross began the speaker portion of the summit by defending American exceptionalism from common liberal critiques. She contended that America’s founding principles, specifically the God-given and unalienable rights of equality and human dignity, inspired every subsequent victory in our country’s history, from the preservation of freedom to opportunities for economic advancement.

She concluded by challenging each attendee to become a champion of American exceptionalism – to truly embody and defend America’s ideals in all aspects of their daily lives. Katie Pavlich, the editor of Townhall.com and author of the New York Times bestseller Fast and Furious: Barack Obama’s Bloodiest Scandal and the Shameless Cover-Up, shifted the focus from the fundamentals of American values to the everyday rights that our Constitution protects. In her speech entitled “The Second Amendment: Empowering Women since 1791,” Katie illustrated how the proper usage of a personal firearm empowers women to protect themselves and prevent assaults from happening. Friday night came to a close with the Woman of the Year banquet honoring Rachel Campos-Duffy and CBLPI’s Student of the Year, Kelly Heilman. Following her 2017 Summer Fellowship, Kelly returned to her college campus as a champion for conservative principles who repeatedly stands up to biased professors and opposition from her peers. She even overcame bureaucratic hurdles from her school’s administration to host a conservative speaker on campus. Congratulations to Student of the Year, Kelly Heilman, for a great year!

As the mother of eight, an accomplished Fox News Contributor and an undeniably “happy warrior” for conservative values, Rachel Campos-Duffy is an outstanding role-model for conservative women as they enter their adult lives. In her speech, she advised young women to pursue careers without being afraid to stop momentarily to nurture the things in life that lead to enduring happiness and long-term fulfillment, mainly love and family.

Rachel empowered attendees to ignore the prevalent liberal narrative that tells women that focusing on family will hinder any hopes of a fruitful career. She encouraged each girl instead to seek the right balance of both her professional and personal aspirations, free from the confines of the liberal narrative. She also explained that the most important life decision each attendee will ever make is who they marry; while career paths may change and jobs come and go, having a happy family and children endure for a lifetime. Congratulations again to our Woman of the Year, Rachel Campos-Duffy! Amber Athey, a CBLPI program alumnus, led Saturday to a strong start by sharing insights into the world of journalism that she learned as a reporter for Campus Reform and a current media and breaking news reporter at the Daily Caller. She advised each attendee to develop her “news judgement,” or acuity for your audience, the framing of a story, and current events. She also stressed the importance of going beyond writing skills as a journalist by being personable, creating a network in the industry, and feeling comfortable with live television and radio show appearances, all of which have been valuable skills that allowed her to advance her career.

Next, Kristan Hawkins exposed the “Lies Feminists Tell” about feminism and abortion. As the President of Students for Life, Kristan frequently has the opportunity to work with women who are considering or have had abortions and thus was able to offer insights into the harrowing details of that decision, which are often disregarded by liberal abortion proponents.

She explained the steps that lead to someone’s decision to have an abortion, the moral implications they consider, and the scarring physical and emotion pain women experience after undergoing the procedure. Kristan also provided countless statistics to debunk myths surrounding Planned Parenthood, effectively arming her listeners with information to refute intentionally misleading leftist arguments. Similarly, Katharine Gorka delivered a powerful story compelling attendees to question rampant liberal lies in the news. She explained that the media accused her husband, Sebastian Gorka, of being a Nazi sympathizer because of a pin he wore to honor his father’s service to the Hungarian military. She cautioned us to be wary of stories like theirs, in which the biased liberal media blows a story out of proportion without factual basis. Such tactics closely mirror those used by the information-warfare tactics used by the Russians during the Cold War; Katharine’s startling examples of Soviet media manipulations in the cases of Sacco and Vanzetti and the Scottsboro Boys

Bay Buchanan finished up Saturday morning portion of the summit with her dynamic speech motivating her listeners to become activists for what they believe in. The former Treasurer of the United States described how she engages with those who disagree with her point of view in order to strengthen her own opinions and principles.

As always, Bay exemplified this back-and-forth process using her immense passion for the pro-life movement. Her speech never fails to inspire young women to be outspoken and proud of their beliefs and principles among their peers, especially in the face of overwhelming liberal opposition.

While the weekend’s speakers expanded each attendee’s understanding of the issues and helped strengthen policy arguments, Rachel’s training equipped them with the skills necessary to effectively communicate the conservative message to whomever they choose.

Overall, the summit received wonderful feedback from its attendees and helped summer interns in the area increase their understanding of conservative principles, giving them the courage and support to spread those ideals, even in the face of liberal hostility.