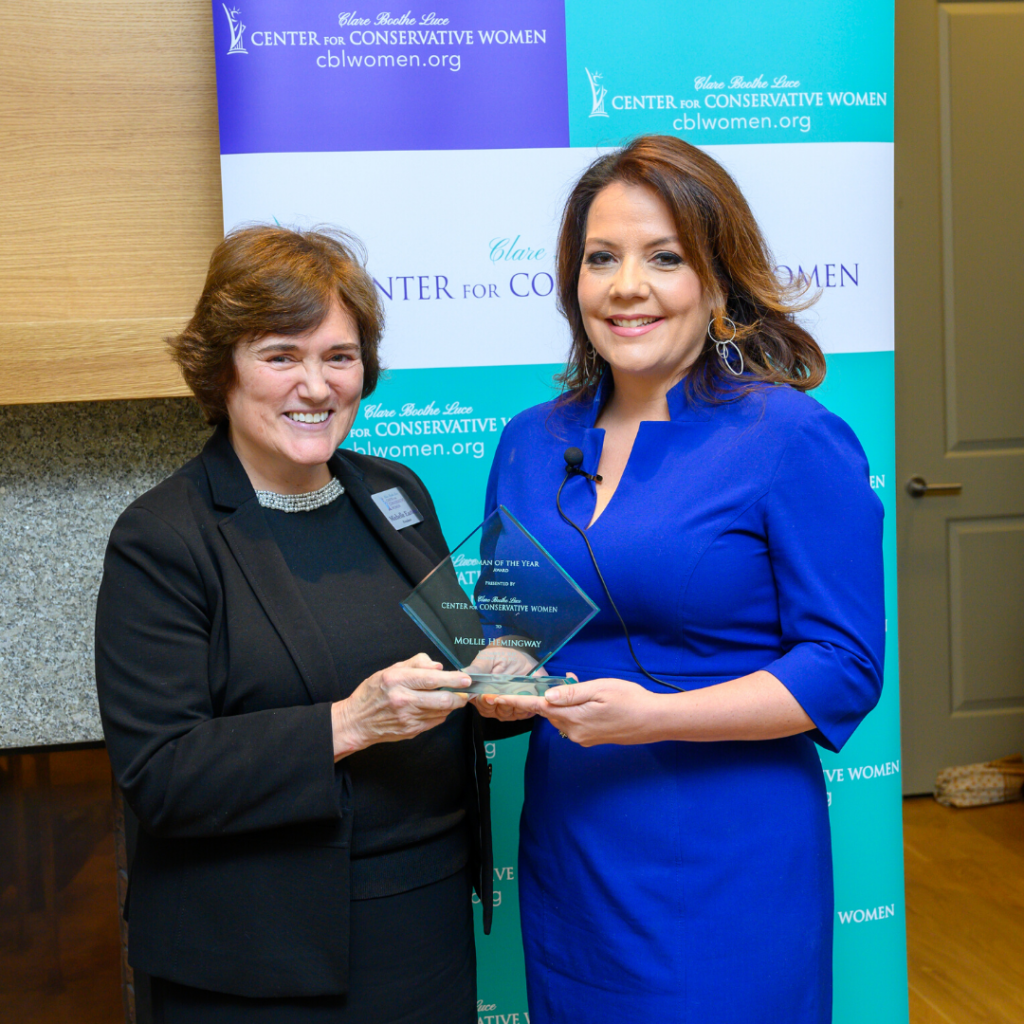 On December 9, the Clare Boothe Luce Center for Conservative Women will honor Mollie Hemingway as the Center’s 2019 Woman of the Year.

Center for Conservative Women President, Michelle Easton, praised Mollie Hemingway saying, “We couldn’t have picked a better woman to receive this award; Mollie is a great role model for conservative women. She courageously exposed the Left’s divisive attack against Kavanaugh in her new book and remains fiercely bold in writing, on camera, and in person. Mollie is confidently conservative and a refreshing reminder that women do not need to succumb to radical feminism to be successful.”

Mollie Hemingway is a senior editor at the Federalist and a Senior Journalism Fellow at Hillsdale College. A Fox News contributor, she is a regular member of the Fox News All-Stars panel on “Special Report with Bret Baier.” Mollie is the co-author of a recently published bestseller, Justice on Trial: The Kavanaugh Confirmation and the Future of the Supreme Court, where she and Carrie Severino conducted over 100 interviews, including those with President Donald Trump and current Supreme Court justices, to piece together a definitive account of the Kavanaugh confirmation hearing.

The Center for Conservative Women is proud to host this special event honoring Mollie Hemingway. As a speaker of ours, Mollie often shares advice and encouragement to young women at our mentoring lunches and summits. Most recently, Mollie offered remarks on her new book at our Conservative Women’s Network event in July 2019. We are proud to feature Mollie in several editions of our Great American Conservative Women calendar, as well as our recently released 2020 edition. Mollie is an incredible role model to young women, and therefore, we are proud to award her our 2019 Woman of the Year award.

Listen to Mollie’s speech here. A transcription can be found below.

[inaudible] we do it in our campus lectures, seminars, at our mentoring lunches, internships, fellowships and Mollie, you are truly one of the greatest leaders. And certainly [inaudible] and she is a publisher of the fabulous book Mollie did. She’s a great board member, she does great mentoring lunches for us and someone from my staff [inaudible] is here. I don’t see them, but they’re here. And they have some books in the back for those who don’t have it yet. Mollie has time [inaudible] especially after you’re here.

And just quickly, I want to thank the loose staff who are here. Jeanne O’Connor is our Vice President. Cindy Rushing, our development director. Kara, who does PR and Emily who does programs. Every year at Clare Boothe Luce we give a Woman of the Year Award to someone who is extraordinary, like our organization’s namesake, someone who shows courage [inaudible] and promoting conservative principles. This year we’re very honored to give the award to Mollie Hemingway. Mollie hardly needs an introduction. She’s known around the country for her Fox News appearances. For her fabulous book about Justice Kavanaugh’s confirmation in the Supreme Court; a best seller. For her writing at The Federalist, a senior editor at The Federalist, and she is one of the best women we’ve ever had lead our mentoring lunches of young women.

And she’s here with her husband Mark. And two beautiful children as well. We’re so happy that your family could be here with you. She’s originally from Castle Rock, Colorado. She graduated from the University of Colorado with a BA in economics and you know, many on the left in the power, the culture and the universities, especially their women’s studies programs, pretend not to be aware of the accomplishments of incredible women like Mollie. But here at Clare Boothe Luce we’re eager to celebrate women of achievement like Mollie. And I want to thank you Mollie, for all you’ve done for America. And for inspiring so many women, especially young women, to work hard, to stand up, to be brave and always to be great leaders too. You’re a leader like Clare Boothe Luce, poised, [inaudible].

Mollie Hemingway:
Thank you so much Michelle. That was incredibly nice. I have known about the Center for Conservative Women for decades, although my first encounter with the Center happened after I was a young enough woman to benefit in college, but I have loved and admired the work of the Center for a very long time. I think it’s so important that we talk with other women, that we share our experiences, that we learn from each other and receiving an award like this has been fun. It’s gotten me to think through those issues.

As Michelle mentioned, I have had the honor of speaking, talking to some young women through the Center and talk about my career and what I’ve learned and I have been reflecting just in recent days how much I have to be grateful for in terms of the conservative women who have inspired me.

First and foremost, my mother Carolyn, who raised me and my siblings and taught us great values with my father by the way. He was a great guy, but not a woman so and she is just the most amazing, wonderful mother and I have been thinking through some of the writers who inspired me, namely Peggy Noonan. I found myself fired from a job and wondering what I was going to do and remembering that I always wanted to be Peggy Noonan. I’d read her book when I was in high school and it just seemed like she had a really fun time writing ideas and I got to tell her that later that she played this important role at just the right moment by appearing on The Daily Show the evening after I had been fired from a job very providential and thinking through even different political leaders.

My amazing coauthor Carrie Severino is here, who is more amazing than any of you could possibly know. She and I decided to do this book together and had no idea how well it would work, but it worked very well. She is a Harvard law school graduate, clerked for Clarence Thomas on the Supreme Court. She has this amazing wisdom and knowledge of Supreme Court history and just this mind that was very helpful for us as we worked through this and interviewed more than 100 people to write the book, “Justice on Trial,” about the Kavanaugh confirmation. And I think one of the things that’s interesting that we didn’t quite expect when we started it was how important women would be in the telling of this story as well. We knew when we were going through the confirmation battle that people would say, well, women oppose Justice Kavanaugh and we’d have to respond to that on TV.

That in fact, not all women believe that rule of law should be thrown out or that due process doesn’t matter. And the fact that just because we are women doesn’t mean that we don’t care about men and their rights as well, but do care about legitimate claims of sexual assault, which is why you take them very seriously and make sure you litigate them properly.

But in writing our book, we met so many interesting women. We learned about so many interesting women, whether it was Ashley Kavanaugh, the wife of Justice Kavanaugh, who showed amazing support for her family. She had had a very interesting life starting with Governor Bush in Texas, coming with him to the White House. That’s where she meets future Justice Kavanaugh, and they have a family together and just thinking through how to navigate those issues and retain your dignity when your family is under assault.

We learned of Rachel Mitchell, the woman who handled the questioning for the Kavanaugh proceedings and how she handled her job with such class and dignity and took her role very seriously, that she wanted to be able to go back to her career as a sex crimes prosecutor and how she had to do her job completely divorced from the political climate that was all around her and how she gently and professionally showed the weaknesses in the case that was brought against Justice Kavanaugh and how her handling of that ended up being extremely important for getting senators to vote for Justice Kavanaugh.

She played a pivotal role against a media environment that was constantly ripping on her and some political people who wanted her to be a pit bull who was attacking the witness and she handled it professionally and did a very good job.

We also learned of Leland Keyser, not a conservative woman, a liberal woman who did not want Justice Kavanaugh on the court. Who was asked to support a story that she determines not to be true of her friend going to a party where this assault happened allegedly, and she ends up repeatedly under great pressure telling people that she has lost confidence in that story. Never had confidence in that story actually, and she did that with people asking her to change her story, threatening to reveal embarrassing details about her background.

Really one of the more courageous people that we learned of and then this is what was making me think, you know, but when I started this whole thing, Susan Collins, who is a moderate Republican Senator who handled her role in the cabinet confirmations so admirably, she wasn’t even on the Senate Judiciary Committee.

She hired staff to help her go through Kavanaugh’s record. She’s targeted for her vote in June before Kavanaugh is even nominated. People are sending threatening packages to her office. The women in her office received threatening phone calls. One quits under that pressure. She stays, Susan Collins stays steadfast, meets with Justice Kavanaugh, has such knowledge of his record that she realizes that she’s probably more knowledgeable about his record than almost anyone else.

One of her liberal friends says something about being upset of something he wrote and she says, Oh, but did you read in footnote four he specifically says that this should not be interpreted this way. And even senators on the judiciary committee didn’t seem to have that knowledge, and when she decides to vote for him, that’s a courageous thing, but even more courageous, she gives a speech on the floor of the Senate that is actually paid attention to by her colleagues.

Usually when senators give a speech, it’s to an empty chamber. In this case, many of her colleagues came to hear what she had to say. It was broadcasted nationally. She gives a speech defending rule of law and the presumption of innocence. She explains standards of evidence and provides a real service to the country at a time when most people had lost their heads. So I don’t know if Carrie and I expected to have such inspiration from all these women as we reported the story, but we did. And we’re so thankful for groups like the Center for Conservative Women who care about sharing lessons that women have learned with each other and very honored for this award. Thank you.