Millennials were already hurting from the 2008 economic crash, which brought the U.S. economy to a standstill, and by the 2010 Obamacare law, which incentivised the creation of part-time jobs over full-time jobs. Now it appears Millennials will bear the economic consequences of dysfunctional immigration policies, too.

"Young Adults: Then and Now," a recent Census Bureau report on how today's 18 to 34-year-olds compare with their 1980 peers, is a discouraging set of statistics for Millennials today. 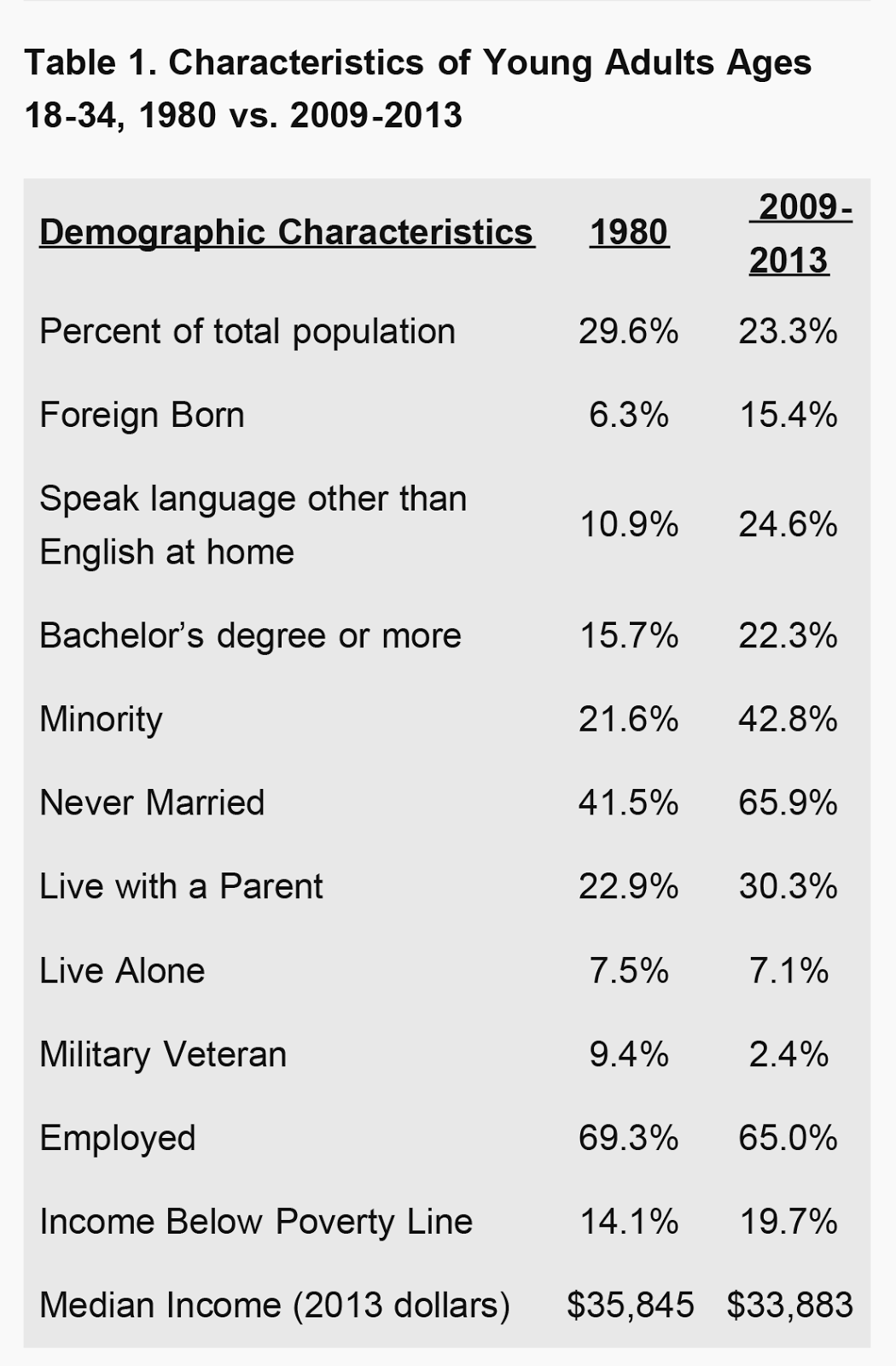 Despite rising educational achievement (Bachelor’s degrees +6.6%), young people have lost ground economically and in terms of independence, as AEI economist Mark Perry's summary chart (right) reveals. Compared with their 1980 cohorts, more Millennials are living under their parents’ wings (+7.4%), slightly fewer live on their own (-0.4%), and substantially fewer are creating their own families (i.e., marrying -24.4%). Economically, fewer are employed (-4.3%), more live below the poverty line (+5.6%), and their median income is down (-$1,962/year).

The growth in “minority” percentages seems to be entirely due to the Hispanic population. The Census Bureau defines “minority” as all people classified as “Hispanic” and “all people who are races other than White.” Based on Census Bureau data (charted below), non-Hispanic “racial minorities” actually declined from 31.6 million in 1980 to 29.1 million in 2013, while “Hispanic minorities” grew substantially, from 14.6 million in 1980 to 53.9 million in 2013. (Census Bureau data doesn’t tell us what percentage of the Hispanic minority is here legally vs. illegally. Perhaps it should.) 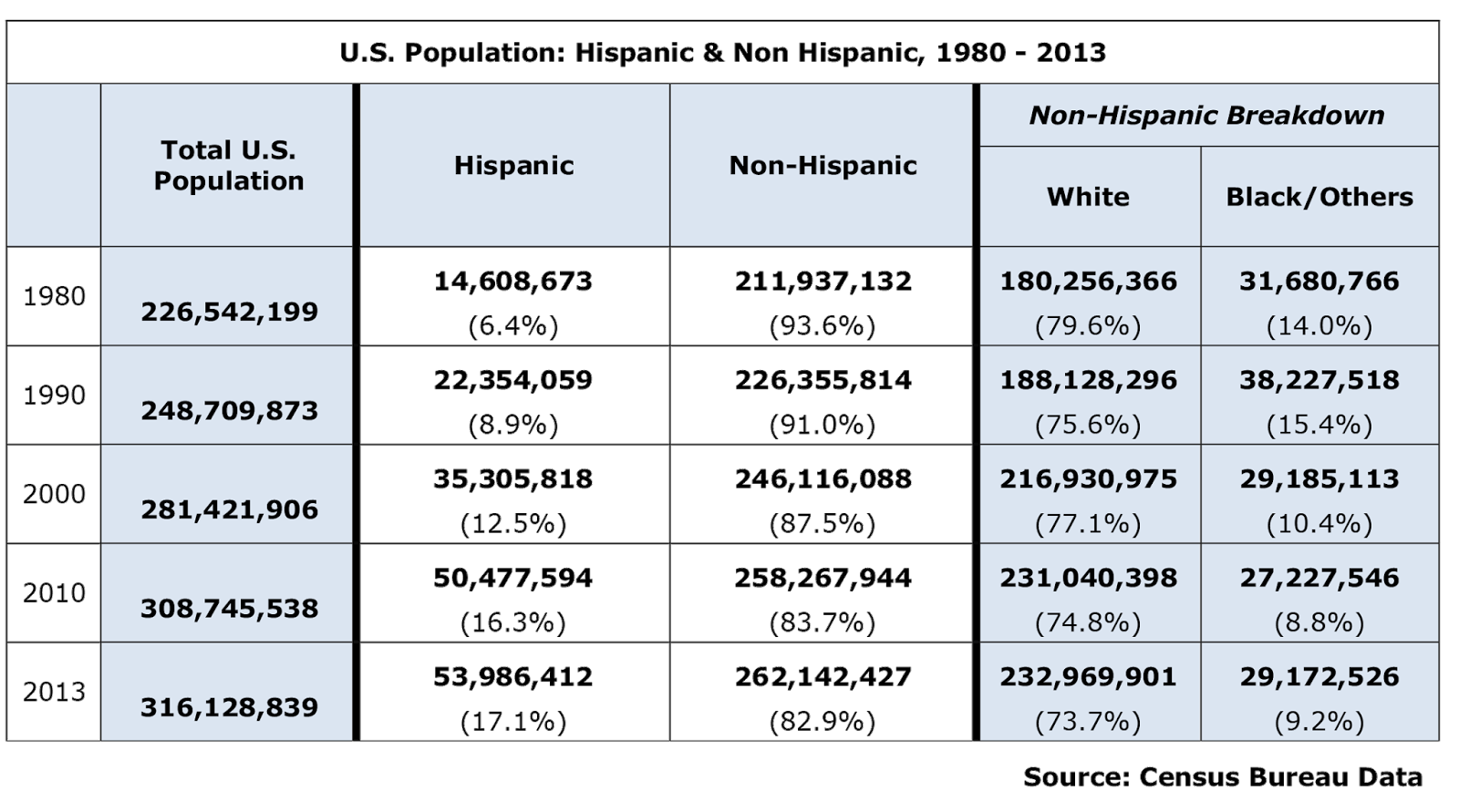 In 1986, Congress passed a law giving amnesty to those who had entered the nation illegally before 1982, and the beneficiaries of that law were mostly Hispanic. The law ushered in preferential go-to-the-head-of-the-line treatment to foreign relatives to legally migrate to the U.S. to join those who had received amnesty.

Prospective illegals read the immigration rule changes for what they were – a huge reward for lawless behavior – and the flow of illegals into the country continued unabated. Now President Obama is attempting another mass amnesty of illegals by executive order, although a federal court has blocked his attempt for the moment. [See update below.]

A new report by the business analysis firm IHS, headlined Hispanics Will Account for More than 40 Percent of the Increase in U.S. Employment in the Next Five Years, offers these predictions:

Now we learn from a Congressional Research Service memo obtained by Breitbart that illegal immigrants allowed to get Social Security Numbers as a result of Obama’s executive amnesty actions could be eligible to file back tax returns and obtain up to four years of federal welfare benefits amounting to thousands of dollars: for a family with three children, the four-year federal welfare back payment would amount to $35,521.

Pity the Millennials, who were already facing stiff economic headwinds from poor public policy choices of the current and past administrations. If Obama’s executive amnesty isn’t stopped, they will be paying back their student loans, struggling to get their own careers going, AND paying for very generous new welfare payments to thousands of new ‘amnestied’ illegals.

—–
UPDATE: For more on what’s at stake in this court case, see Immigration and the End of the Rule of Law, in which Jonathan Tobin writes, “The stakes in this argument don’t merely revolve around the status of illegals. If liberal federal judges and the president are determined to trash the rule of law in this manner, we are on the verge of a full-blown constitutional crisis.“

Posted by Lil Tuttle on Wednesday, February 25th, 2015 at 11:03 am in National Security & Immigration