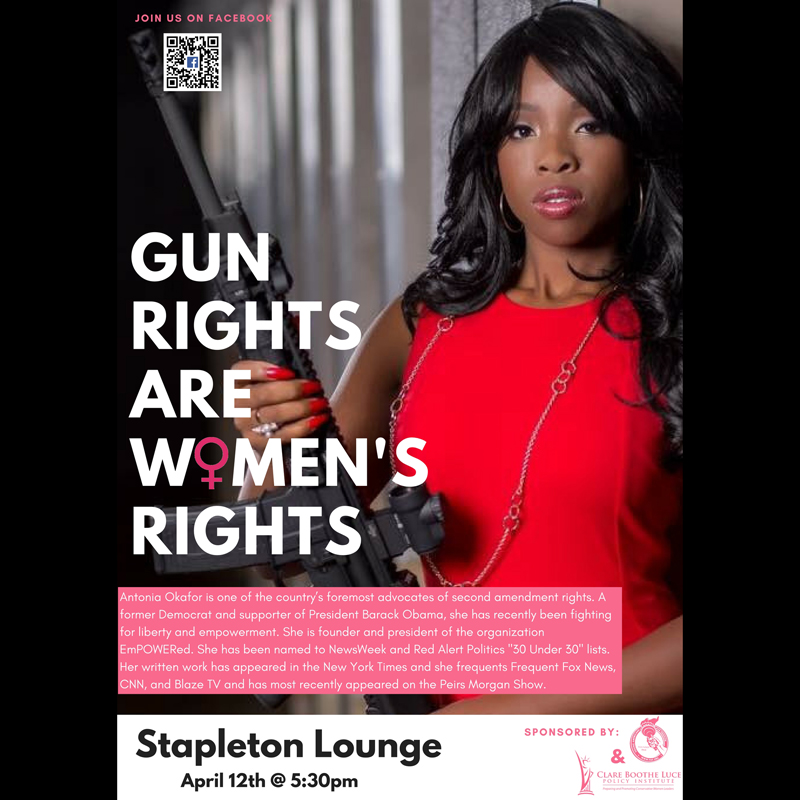 Although the main purpose of the meeting was said to be to “heal” students after the event, it quickly changed to attacking Clare McKinney and her upcoming Clare Boothe Luce Policy Institute- sponsored event with Antonia Okafor on women’s empowerment and the Second Amendment. Students and faculty claim that Clare McKinney is being targeted by right- wing groups to bring in speakers to indoctrinate students at the college, as if she is unable to believe in conservative principles on her own accord. They also claimed that the NRA was sponsoring the event with Miss Okafor.

The “healing circle” concluded with the attendees agreeing that they needed to form a council to vet speakers so that this may not happen again, and to stop Miss Okafor from speaking on campus on April 12.

This morning, Clare received an email from the office of Vice President Karen Johnson of Saint Mary’s College requesting a meeting about the upcoming event, which had already been approved by the school. This meeting has been scheduled to occur after next week’s spring break.

Vice President Karen Johnson forbids any advertising for the second amendment event to occur before the meeting with Clare. This is a ludicrous request because the school has failed to approve the advertising that Clare has already submitted. In order to put up flyers and other notices about the event around her campus, Clare must get a literal stamp of approval on her flyers from the obstructionist staff. The school has refused to allow students to be informed of the event by flyers even though they have approved the event and posted it on the college’s student portal.

“At this point it’s clearly viewpoint discrimination,” said Clare. “No other club faces the scrutiny that my Young Americans for Freedom chapter does or is required to meet with administrators like we are. I feel like I’m under constant attack and need to defend my beliefs at every turn, that’s not an environment that “cultivates a community” that “responds to the needs of all women” as the Saint Mary’s College statement of purpose details. Conservative women, who want to defend themselves through the Second Amendment, exist at Saint Mary’s College — I can promise you I’m not the only one — and it’s time these opponents of free speech start recognizing our need to have our views brought to discussion and debate. ”

Clare has brought CBLPI speaker Bay Buchanan to Saint Mary’s College in the past to discuss conservative issues. During that event, her flyers advertising the event were ripped down and she faced similar opposition at Saint Mary’s.

“Students on campus express the desire to file harassment complaints against me,” Clare said, “when all I have done is hold a viewpoint that contradicts theirs. Students launch personal attacks against me on a regular basis because I am helping to create an environment at Saint Mary’s that’s a marketplace of ideas.”

Saint Mary’s actions seem to suggest that they believe their students are too intellectually fragile to hear conservative ideas, so such speech should be prohibited. While the college is not footing any part of the bill for this lecture, the college is still trying to find ways to suppress the event by failing to approve the Second Amendment flyer for advertising, for example. Students and faculty continue to work in secret to cancel this second amendment event and find ways to stifle and prevent diversity of thought. One idea expressed by the “healing circle” attendees was to create a committee to vet speakers invited to campus. This is just another tactic used by the Left to prevent conservatives from sharing their ideas on campus.

Clare was told by others who attended the event that the healing circle quickly turned into a brainstorming session on ways to cancel the upcoming event with second amendment advocate Antonia Okafor. Clare Boothe Luce Policy Institute condemns the action taken by Saint Mary’s College and their unwillingness to support a student leader like Clare McKinney as she brings much needed intellectual diversity to campus. The lecture will occur on April 12 in Stapleton’s Lounge on Saint Mary’s Campus.