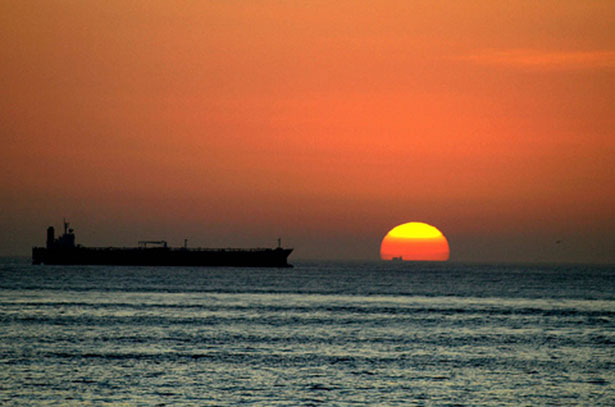 After a 40-year prohibition, the first tanker of exported American oil sailed from Texas bound for France. A second tanker sailed for the Netherlands shortly after. BloombergBusiness reports:

Inside the Panamax oil tanker was a cargo that some on Capitol Hill had dubbed "Liquid American Freedom" — the first U.S. crude bound for overseas markets after Congress lifted the 40-year export ban. …

The implications — both financial and political — for energy behemoths such as Saudi Arabia and Russia are staggering, according to Mark Mills, a senior fellow at the Manhattan Institute think tank and a former venture capitalist. “It's a game changer,” he said. …

For the Saudis and their OPEC cohorts, who collectively control 40 percent of the globe's oil supply, the specter of U.S. crude landing at European and Asian refineries further weakens their grip on world petroleum prices at a time they are already suffering from lower prices and stiffened competition.

Oil exports are good economic and geopolitical news for America and her allies.

Meanwhile, the U.S. is also poised to make its first shipments of liquefied natural gas, or LNG, from shale onto world markets within weeks. … Cheniere Energy Inc. expects to have about 9 million metric tons a year of LNG available … That's enough to power Norway and Denmark combined for a year. …

“We will definitely replace Russia as the lowest-cost supplier," Fadel Gheit, an analyst at Oppenheimer & Co., said of the U.S. expansion. "All of these things will have geopolitical and economic consequences. It's a win-win for the U.S. and the West."

American innovation in shale oil drilling technology made it possible for the U.S. to reduce its dependence on foreign oil over the past decade, as the Bloomberg graphic below shows. Exporting our abundance will bring global dollars to the U.S. and free our allies from their dependence on less-friendly nations.