Webinar: Truth in a Time of Lies 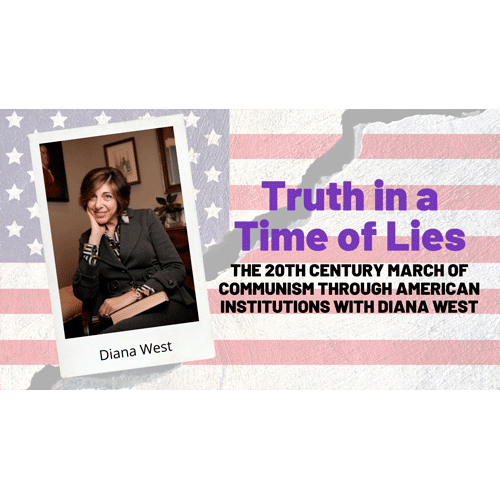 Webinar: Truth in a Time of Lies

Most college students are facing waves of propaganda and indoctrination from professors, mainstream media, Hollywood, and social media. When almost every facet of your life is working against truth, it is hard to know how to find truth. Often we do not even know the impact of liberal messaging, until something stops us in our tracks and forces the issue. This webinar will do just that, if you watch it. Author and Journalist, Diana West will be discussing truth and unknown facts of American history in the 20th Century. While researching, she stumbled upon documents that led to the writing of American Betrayal – a history book discussing the 20th century march of communism through American institutions. What you know about American history needs a factual revision. West exposes the series of lies and manipulations by ascendant communist and pro-communist individuals in America.

Diana West is an award-winning journalist and the author of multiple books, including The Red Thread: A Search for Ideological Drivers Inside the Anti-Trump Conspiracy, American Betrayal: The Secret Assault on Our Nation’s Character, and The Death of the Grown-Up: How America’s Arrested Development Is Bringing Down Western Civilization.

A journalist since graduating from Yale, West began writing a weekly newspaper column at the Washington Times, where she also wrote editorials under editors, Helle Dale and Tony Blankley. The column would be nationally syndicated for 15 years. A collection of West’s columns came out under the title, No Fear: Selected Columns from America’s Most Politically Incorrect Columnist. Her work has appeared in many publications and news sites including The American Spectator, Breitbart News, The Daily Caller, and The Epoch Times. West has made numerous television, documentary and radio appearances, and addressed audiences including at the American Legion, the Danish Parliament, the Heritage Foundation, the Hudson Foundation, Institute for the Study of Strategy and Politics, the Naval War College, and Yale.

Is the same replacement of facts with liberal narrative under way in our own time? This talk will not only expose unknown American history, but West will relate the facts of “American Betrayal” to our current situation in 2021. This information will be key to understanding how we reached our current status in America. Upon that foundation, you will be better able to fight the indoctrination from the Left. You will not want to miss this important webinar! Sign up today!