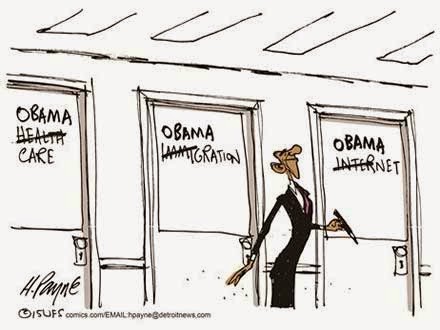 Obama’s executive amnesty to 6 million illegals would give them work permits, but it would not allow them to qualify for Obamacare. As a result, they would become “ideal” workers for employers to hire if employers are trying to avoid the massive “employer responsibility tax” — a $2,000 to $3,000 per-employee annual tax imposed by Obamacare on employers for each of their workers who qualifies for Obamacare subsidies through state exchanges.

Because the 6 million immigration beneficiaries aren’t eligible for Obamacare tax subsidies, hiring them reduces employers’ chances of triggering the employer responsibility tax. Employers have a powerful financial incentive to hire them in place of U.S. citizens and permanent residents. The president’s unilateral grant of work permits, combined with the fact that these workers cannot trigger the employer responsibility tax, makes those workers significantly more attractive. … The inevitable result is that more workers will lack employer-provided health insurance coverage. [snip]

The president isn’t a one-person lawmaker. He doesn’t have the power in our constitutional regime to fix laws he thinks are broken. When a president does so, he not only intrudes on Congress’ power, but also creates unpredictable repercussions for other laws. It’s no small irony, that, by unilaterally attempt to fix our immigration law, Mr. Obama has undermined his own signature legislative achievement.