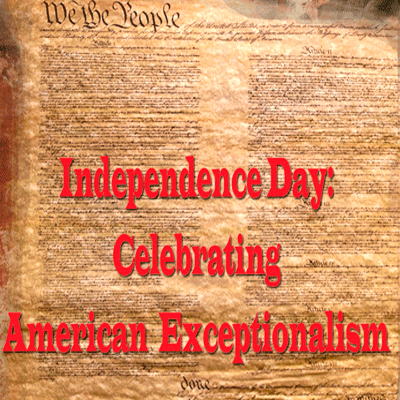 The Fourth of July has arrived. It’s a day when we give thanks for the independence of our nation, have a cookout with friends and family, and celebrate the peace and security we have as American citizens. Like president of Regnery Publishing, Marji Ross, said in a recent speech, America is an exceptional country.

Despite our many disagreements, America is still exceptional. Why?  Because American Exceptionalism is derived from our founding Constitutional documents, not our people, not our current thoughts, and not our contemporary circumstances. We can just look to its founding to understand why our rich history and unique founding makes us the greatest country in the world.

America was founded because  brave men and women were wise enough and cared enough about  individual freedom to fight an established monarchy to provide that freedom to a citizenry.

For the first time in human history, our Founding Fathers asserted that the rights of each person came from God, not from other men or government, and they staked their lives and fortunes to fight for these natural rights of the individual.

Secondly, our founders structured America’s government so that the country would be ruled by the people. The government would be there to maintain order, but the rule of law belonged to the people. They gave Americans their natural freedoms in the  Constitution along with the freedom to defend the constitution through the right to bear arms. Our Founders recognized that the government must be contained so that the people could live out their lives without concern over property, speech, and prosperity.

The Declaration of Independence proves first-hand how important natural rights are to the Founders. The second paragraph states:

We hold these truths to be self-evident, that all men are created equal, that they are endowed by their Creator with certain unalienable Rights, that among these are Life, Liberty and the pursuit of Happiness.

Everyone knows this line – it has become the mantra of our country. Our rights are based on the principles of freedom. The Founding Fathers asserted that no man is allowed to infringe upon the rights of the individual. They truly wanted it to be a nation of the people and for the people.

In America, we are allowed to be who we want and are allowed to prosper as much as we want. The individual has the freedom and responsibility to do what will make them happy and prosperous. For hundreds of years we’ve had people immigrating to America in search of a better life, believing that if they work hard, they can achieve the American dream.

We are so fortunate to have men and women who fight to maintain the values on which our country was founded and citizens who still believe that this is the core of what makes America great.

The Fourth of July represents so much more than the fireworks, cookouts or concerts. The Fourth of July represents the day that we became one nation under God, a nation so each citizen has equal opportunity to achieve the American dream regardless of race, sex, political affiliation, or whether they are first generation Americans or have ancestral roots from colonial times. The Fourth of July is a day for every person to celebrate the gifts our Founding Fathers gave us – the opportunity to create a successful and fulfilling life. It is a day for us all to celebrate how truly fortunate we are to live in the United States of America.

Abigail Thomas is a 2018 Summer Fellow.