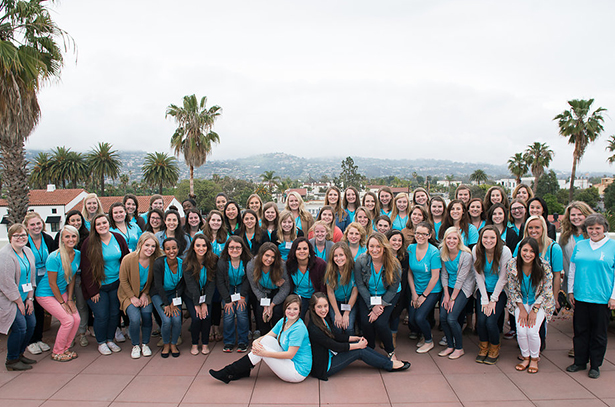 In a two-day weekend retreat packed with bright and bold students from 43 different college campuses across the nation, women gathered in beautiful Santa Barbara California at CBLPI's 2016 Western Women's Summit to celebrate conservative successes, to network, and to share insights into leadership opportunities. Ying Ma, author of "Chinese Girl in the Ghetto," opened the Morning Session of the Summit. She shared insights from her journey as a young immigrant child from Communist China, through her childhood in an Oakland CA, to her success as an attorney and a former presidential campaign spokesperson. Ying has had a relationship with CBLPI since her college days at Cornell, when she sponsored a guest lecture on campus by one of CBLPI's great conservative women speakers. Regnery Publishing president and CBLPI board member Marji Ross shared "Seven Surprising Secrets of Best-Selling Female Authors … and how your future happiness might depend on them." With three daughters and an amazing career, Marji offered both practical and professional insights that attendees could put to good use in their own spheres of influence. Career discussion began the Afternoon Session. Attendees heard from three fascinating women entrepreneurs who love what they are doing and do it exceedingly well.

Michelle Weslander Quaid, founder and president of Sunesis Nexus LLC and a physics/IT engineer by training, shared career insights garnered from her experience in high government levels in national security, a leadership position at Google, and starting her own consulting firm.

Andrea Ridgell, owner of Mishay Salon and Spa and founder of Glop & Glam (an international line of natural hair care products for children), described an entrepreneurial journey that began at age 15 and saw her through the manufacturing world to achieve national and international success.

Amanda Owens, founder of Future Female Leaders, began her entrepreneurial adventure as a college student on Twitter and has built it into a social movement for young conservative women. Lisa Daftari, a Fox News Contributor, shifted the focus to far less liberated women with her presentation, The Real War on Women. A Persian herself, Lisa offered insights into the plight of women in Muslim-dominated countries who have precious little freedom to express themselves or pursue their dreams. Actress Stacey Dash, author of the soon-to-be-released book, There Goes My Social Life: From Clueless to Conservative, spoke about her transition from liberal to conservative. She offered insights into how she believes the feminist movement has been hijacked by women who choose self-inflicted victim status over independence and personal responsibility.

"By all statistics, I shouldn't be here. I should be dead," Stacey told the audience. "I've made mistakes in my life and I have come up from them. And I refuse to be a victim. … I believe in our country. I believe in us as women. I believe we are the strength and the backbone of this country." The weekend included a tour of President Ronald Reagan's former ranch home in the mountains above Santa Barbara. It may have been the wettest tour ever! Yet even the rain couldn't dampen the high spirits of those who had a chance to see the Reagans' personal retreat, which has been faithfully protected and maintained by the Young America's Foundation.

If you could not attend and would like to hear these speakers, please visit our YouTube channel (with thanks to videographer Paul Mathieu). And if you attended, please enjoy the more than 400 photos of the event taken by photographer Jensen Sutta.

Note: Students attending the Summit hailed from these universities: